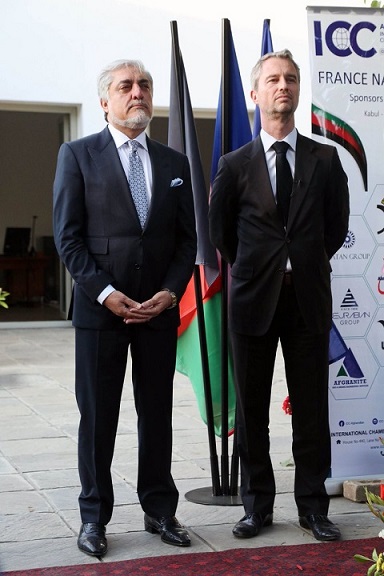 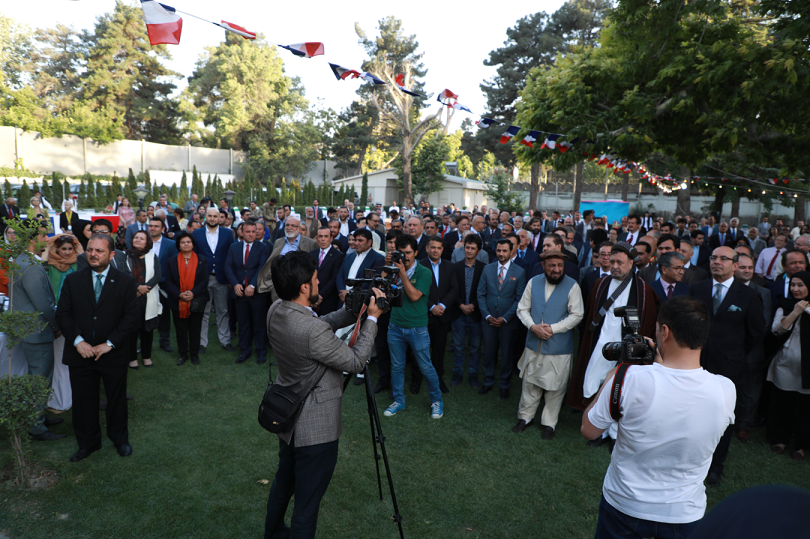 Dear Doctor Abdullah, Thank you for being with us, this year again. Your friendship is truly long lasting. When I was for the first time in your presence in Kabul in August, 2002, the young diplomat I was by then couldn’t imagine that you would be my host here seventeen years later.

This is the good thing in inviting your neighbors when you throw a party. Usually they don’t call the police to complain about the noise. I hope my other neighbor won’t call the police. Otherwise I guess I would be quickly reassigned as French Ambassador to Antarctica.

We celebrate Bastille Day at the end of a crucial week for Afghanistan. For the first time, a dialogue has started between Afghans. We believe a reconciliation is possible, if it is based on the constitution of the Republic.

This constitution, dear friends, is your war bounty. It is your common treasure.

We also believe that there is indeed a growing Afghan nation, one century after the independence of Afghanistan. Building a nation requires time and passion. We, French, consider that a nation is before and foremost about a shared will to live together.

In 1919, King Amanullah was concerned that the independence of Afghanistan by itself would not be enough to create the Afghan nation. Therefore he had three intuitions that he decided would become public policies :

First conviction of the King : To create a true afghan nation, everyone in the country has to feel that he or she is Afghan before being Tadjik, Pashtoun, Ouzbek, Hazara, Turkmene or Sikh. Therefore, on the first taskeras that were issued, was only written the precious word “Afghan”, with no mention of any ethnic group. More than ever, your diversity should be your strength, not a cause for division.

Second royal conviction : To build an Afghan nation, the country needs education for everyone, little boys as well as little girls. Therefore he started a program to provide free education for the children. How relevant ! Please don’t let anyone waste this precious legacy. Young girls will be watching. Being the father of two, I can testify that you don’t want to mess with them. Because one day, they will have the power anyway.

Third royal conviction : To form a national identity, the Afghan people needs to rediscover its own history. Therefore, King Amanullah asked the French to start archeological searches around the country. No later than 1922, even before France opened its embassy in Kabul, the DAFA got its first authorization of excavation.

These pioneers uncovered marvels which made Afghanistan famous all around the world : the old Hellenistic and Kushan city of Balkh, the bouddhist monastery of Hadda, in Nangahrar, the caves and the Bouddhas of Bamiyan, the treasure of Bagram, the Greek city of Aikhanoum, in Takhar Province, the minaret of Jam, in Ghor Province, the religious complex of Mes Aynak, in Logar Province, not to mention so many other sites. Then the Afghans realized that their history was incredibly rich, starting from the era of Bouddhism, when Afghanistan was one of the key places for the diffusion of this philosophy, to Alexander the Great, Iskander who came here as a former student of the great philosopher Aristoteles, because he was eager to learn from other religions and philosophies to form his wisdom.

So from the pre-islamic period till today, Afghanistan has always been contributing to the richness of world culture. Such is your history, and you should be proud of it, as we are proud to be your partners in this quest.

Entering this Embassy, you may have noticed on your right the memorial for the French soldiers who died in Afghanistan. France joined the operations at the very beginning, in 2001, participating to the maritime operation. In January 2002, 400 French soldiers deployed under the ISAF command arrived in Kabul. A contingent of more than 200 Special Forces were deployed in the Spin Boldak area. One of our first losses was notably Master Chief Loïc Le Page, a Navy Commando, killed in Maruf district of Kandahar province, leading his unit during an assault of taliban against his position. Loïc Le Page was posthumously awarded with the Legion of Honor, but also the US Bronze Star Medal for Valor.

Our 4000 soldiers left Afghanistan in 2013 to be instantly redeployed in Sahel in Africa, starting a very demanding counter-terrorism mission. Since that date, 4 000 French soldiers are fighting against Daech and Al Qaida in an operation covering 5 different countries, on a distance of more than 4 thousand kilometers. I emphasize this to remind us that this war against terrorism is a global war.

We proudly take our part in it. But before we lost soldiers, we first lost members of NGOs. The time of the French doctors came to Afghanistan no later than the spring of 1980, in Badarshan, in Nouristan, in Panjshir, in Wardak, in Balkh, in Logar. Their names are still remembered by many of you. Among them, the first to die was Thierry Niquet, 27, who was murdered in November 1986. Bettina Goislard too, was assassinated in november 2003, in Ghazni, while working for the UN High Commissionner for the Refugees. She was the first UN employee to be killed after the fall of the Taleb Emirate. Others would die too, men and women.

Too many journalists also died, unfortunately. This is a way for me to emphasize that we all have a historic responsibility towards those who made the ultimate sacrifice, being Afghan soldiers and policemen, or foreigners who came here either on duty or by passion.

I emphasize this because in two months, Afghans will have the opportunity to vote to elect their new president. Again, this election is your war bounty. Don’t let anyone deprive you from that precious right so many people around the world would love to enjoy. Countries and people are never divided by elections unless these elections are not fair and transparent which always, automatically creates mistrust and frustration that doesn’t disappear.

Please allow me to make a few comments, as a friend :

On July 26th, the campaign will start. If you love your country, you have to make these two months count. Badly. Make it a moment of real politics. Make this period a moment of vivid debates, of free expression, of respect. Make it a moment of passion. Put the 18 candidates under your own personal scrutiny. Ask questions. Tough ones. Start debates about what Afghanistan should do. About peace notably ! Read the press. You have the incredible privilege of enjoying a real free and diverse press. You can rely on courageous and professional journalists. Make sure they are respected and protected. They will be your reliable spokespersons when it comes to making the candidates accountable. Also, hold the Electoral management bodies accountable. Hold the Independent Electoral Commission and the Electoral complaints commission accountable. And volunteer to scrutinize the vote. Commit yourself. Once you are convinced that one of the candidates is worth campaigning for him, go for it. Bring your help, your ideas, your energy.

Go convince your fellow citizens, throughout the country. That’s the best way to discover it. Have fun doing it. You will make friends forever. Bring your passion. Make sure you are exhausted on September 28th. Accept no compromise before that day. Because believe me. No election is won in advance. No election is won before the day people actually vote. And if your candidate loses, then draw some lessons for the next election. And if he wins, always bear in mind that he has more duties than rights towards your people.

Compromising is not necessarily a sign of weakness, it is a formidable strength in democracy. Because we share a common commitment in values, we can disagree, according to the rules of the game, according to the constitution. We do compete in elections but we are not enemies. These common values among the democrats, among all those who believe in a prosperous destiny for the Islamic Republic of Afghanistan, these values will be their greatest strength in any future negotiation : ability to compromise but firmness on principles.

I wish the best for Afghanistan and the Afghan nation.