Accueil > L’Ambassade > L’ambassadeur > Exclusive interview with French Ambassador to Kabul on situations in (...)

Exclusive interview with French Ambassador to Kabul on situations in Afghanistan and bilateral relations – (Kabul, 24.07.2021)

France is one of the few countries in the world with which Afghanistan has had good and friendly relations since the beginning. The history of Afghanistan’s friendship and relations with France dates back to the years of Afghanistan’s declaration of independence by King Amanullah Khan.

In the last four decades that Afghanistan has been plagued by war and violence, France has not left the Afghan people alone. The Kabul Times have recently conducted an interview with French Ambassador to Kabul, David Martinon, on situations in Afghanistan and the bilateral relations which is as follow : 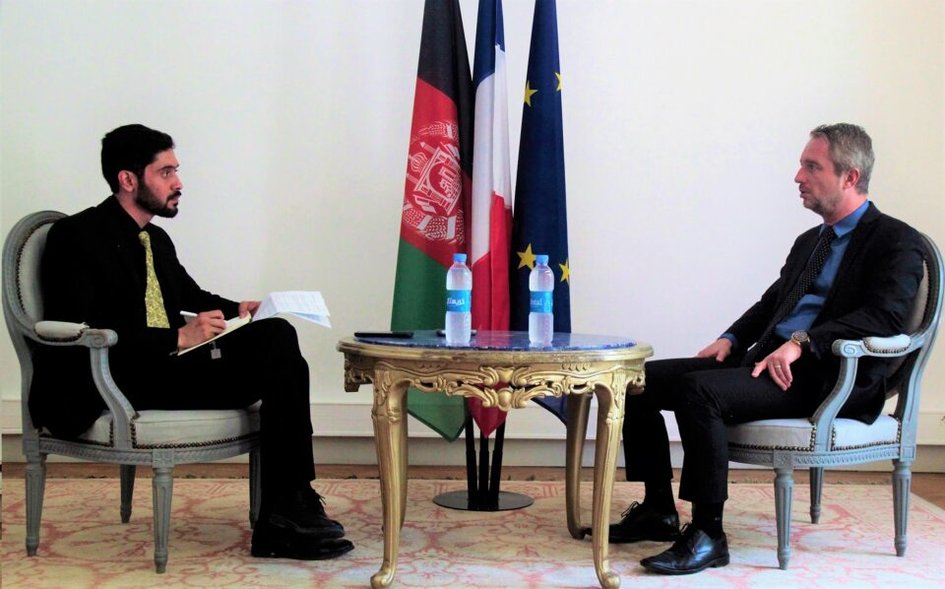 KT : You celebrated the Bastille Day or your National Day on 14th of July, to what extent this day is important to you and the world ? And what can the world, and Afghanistan learn from the democratic and freedom movements in France ?

Amb : So, Bastille Day, on 14th of July is a crucial moment in French history because it is the beginning of the first French revolution. There are twin revolutions, the French and the American revolutions. The American revolution started a bit earlier, but it was in a new continent. The difference with French revolution is, that French people decided to change its very old, multicentennial regime. So, it’s very important because it marks the beginning of the process, through which the French people obtained the right to vote, freedom of expression, freedom of the press, equality for all, especially between men and women, and all the rights we used to sum up in our national motto, which is “liberty, equality, fraternity”.

So, lessons for new democracies are that democratic gains are not easy. They usually come with revolutions, with wars, with fighting, with blood being spilled, but on the long run there is not going back. I mean, there are step backs and there were step backs in French history, but others revolutions later in the 19th century led to the establishment of the France Republic in 1875.

The lesson for our Afghan friends is that, since they first made huge progress in terms of political and social rights since 2002, and though the Islamic republic of Afghanistan is obviously a work in progress, I don’t think any step backs could last for a long time. There maybe step backs or there has been step backs, but on the long run, we can only see progress.

I am thinking of that, because of course, we hear what the Taliban are doing in the areas they control : they refuse the girls go to schools sometimes after the age of 12. Well, I am absolutely certain that this can’t last on the long run. There is no place in the world, where girls cannot go to schools. And you know during King Amanullah Khan’s time, after he declared the independence of Afghanistan in 1919, two years later, he started implementing some structural public policies, and among them, were public educational programs. He was absolutely convinced, that without education, there would be no national sentiment, no national unity in Afghanistan. And for him, public education was intended for boy and girls as well.

KT : In such a circumstance that Afghanistan has been witnessing increasing violence and takeover of some districts by Taliban, do you think the recent achievements, particularly the democratic processes and freedom movements would be protected, and Taliban would pose no threats to such values ?

KT : But If Taliban do not respect and undermine the achievements made so far with the help of international community, what will be the reactions of France and the allies ?

Amb : First of all, Taliban have not won the war, the war is ongoing, and we are confident that the afghan national army will eventually prevail. Most of all, we hope that there will be a political settlement through a peace process -a real one, not a fake one-, in which both parties genuinely enter into discussions, and genuinely try to make progress and find political solutions.

If Taliban believe that they will be in a position to control Afghanistan, as a whole, they are wrong. Afghanistan is not a country anyone can control like that. People here having their own character, their own pride, and we are pretty sure that the Afghans will be so attached to their rights, political and social rights, that they won’t eventually accept a regime that do not respect them.

KT : But in practice they are doing different things. Since US-Taliban deal, the group committed not to attack major cities, media and right activists, but contrary to their promises, they have been attacking cities, right activists and media. As per reports, they have limited media activities in the areas under their control, do you think US-Taliban deal is the biggest issue now, as the group now seeking international legitimacy ?

Amb : They haven’t got this international legitimacy, it’s not because some countries have talks with them and are trying to educate them to what the reality of the world is, that they have gained legitimacy. Yes, you are right, according to what we see on the ground and the reports we have, they continue targeted assassinations, they kill civilians, they keep looting, they destroy buildings and put them on fire, they destroy infrastructures of communications and power, they repress the human rights of women and girls in some of the areas they control.

They repress public and private media outlets and try to control them. All these are facts, and they are absolutely unacceptable. They won’t gain legitimacy by acting like that.

KT : In your message on the occasion of Bastille Day, you asked Taliban to shun violence and end destruction of vital infrastructures.

KT : But they are doing it now, and do you think they will end and what is their goal behind that ?

Amb : They should start considering that this is their own country : the investments that the Afghan people and the international community have made over the past twenty years and sometimes earlier than that-, there is no assurance that we will commit to do them again. When they destroy a bridge, how they can assure that this bridge will be rebuilt ? If they destroy a road, how they will be sure that anyone will get interested in rebuilding that one that was destroyed by Taliban ? They should start considering this is their own country. If they pretend that they act on behalf of the Afghan people, they should have in mind, most of all, the prosperity of their people.