Meeting of the "Mini Dublin Group for Afghanistan" on drugs

The "Mini Dublin Group for Afghanistan" is a platform dedicated to dialogue on every aspect of drugs issues in Afghanistan. A meeting of this group chaired by H.E. Ambassador Martinon took place on December 2, with the participation of Acting Minister of Interior Masoud Andarabi. The partners agreed to launch an operational coordination body. 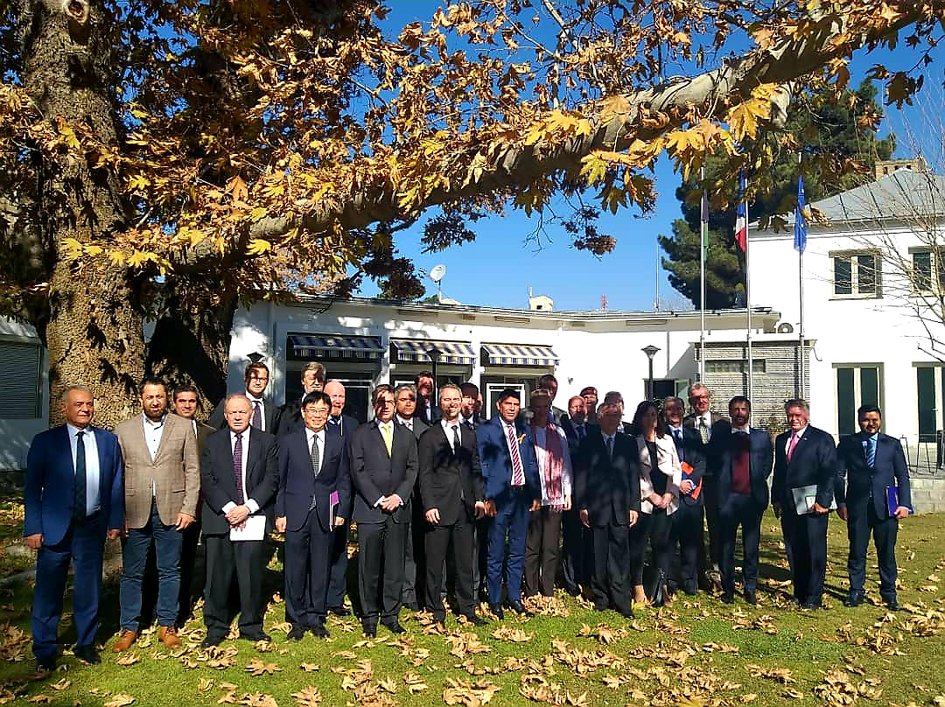 The “Mini Dublin Group for Afghanistan” has convened on Monday 2nd December at the French Embassy in Kabul. Held in the presence of the acting Minister of Interior of the Islamic Republic of Afghanistan, H.E. Massoud Andarabi, this meeting was chaired by the French Ambassador, H.E. David Martinon, with the participation of the Special Representative of the United Nations Secretary-General and the representatives of 19 countries and organizations, notably the European Union, NATO and the United Nations Office on Drugs and Crime (UNODC). Dedicated to the fight against drugs, the Dublin group is an advisory body whose local branch for Afghanistan and its meetings in Kabul are chaired by France.

This meeting allowed for fruitful discussions on how to best coordinate collective efforts against drugs-trafficking, which remains a cause of grave concern for all international actors. We observe regular gains in productivity in the production of all major drugs, leading to a decrease of prices, even though cultivated surfaces have significantly decreased thanks to numerous factors, notably the determination of Afghan security forces. According to UNODC figures, Afghanistan ranks first worldwide when it comes to producing opium (90%), is the second most important producer of cannabis and has seen over the last years a dramatic increase in the production of methamphetamine. The country is also confronted with a difficult situation in terms of local drug addiction, with according to SIGAR (Special Inspector General for Afghanistan Reconstruction) figures an esteemed 11% of the Afghan population impacted by this phenomenon.

The members of the “Mini Dublin Group for Afghanistan” are committed to continue working in close cooperation with Afghan authorities and taking actions in order to enhance the effectiveness of the fight against drugs. Doing better regarding those challenges is a shared responsibility in order to consolidate all our societies’ security, stability and economic development. There will not be any durable peace in Afghanistan as long as narco-traffic revenues channel financial support to terrorist groups. Besides, as long as drugs production and trafficking represent a very significant portion of the Afghan GDP, there will not be any opportunity for a steady development of the country.

In this perspective, international actors agreed to step up their collective mobilization, together and with representatives the Afghan Government, to reinforce the dialogue on all the steps of the drugs issue. All aspects should be tackled, ranging from supply, production and transformation to transportation and commercialization. As regards illegal financial flux generated by traffics, it has been emphasized that it is now mandatory for all UN member states to take effective measures against drug trafficking which is used by terrorist groups to raise funds, as per UN Security Council Resolution 2462.

The members of the Mini Dublin Group agreed to launch an operational coordination body which, apart from themselves, shall include all concerned or interested states represented in Kabul, notably regional actors and neighbouring countries.