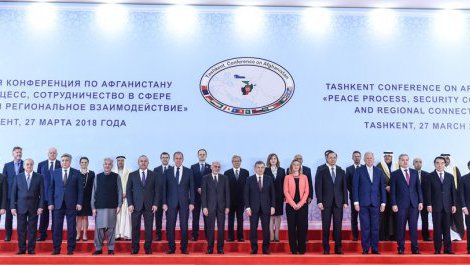 Let me first thank His Excellency the President of Uzbekistan for hosting this conference and for both him and Afghanistan for taking the initiative of this timely and important meeting. We welcome the Tashkent conference which is putting Afghanistan back at the heart of international attention a month after the second peace conference in Kabul, on February 28th. We welcome the Uzbek considerable efforts in enhancing regional cooperation and connectivity.

I will limit myself to the following three remarks :

1/-My first remark relates to the situation in Afghanistan. I would like to commend, on behalf of France, the determination of the Afghan authorities in combatting terrorism and pursuing the needed reforms to consolidate democratic institutions in the country.

The very high level of insecurity and violence in Afghanistan remains however a major source of concern for France. Armed confrontations and repeated terrorist attacks continue to severely destabilize the entire country. In this respect, France shares the determination of the Afghan authorities, with the help of their international partners, to combat terrorism.

We encourage Afghanistan to focus on two main priorities for 2018 :

the first one is to keep the momentum created by the Kabul conference on February 28 for an Afghan-led and Afghan-owned peace process. This requires a revitalization of the inter-Afghan dialogue, but also a sincere commitment and unambiguous support of all of Afghanistan’s neighbors and international community for peace. We fully support the peace offer without condition made by the National unity government and call upon the Taliban to renounce all violence and engage positively and constructively to a lasting peace in Afghanistan.

the second priority should be the conduct of free and transparent local and parliamentary elections as scheduled. Progress has been made in this area and preparations for the parliamentary elections have been initiated by the competent authorities, in particular the Independent Electoral Commission. From this perspective, women’s full participation in the electoral processes, both as voters and as candidates, will be essential.

We must also keep in sight the fragility of the humanitarian situation, in particular the situation of refugees, as well as the very precarious situation of women and children, who remain the first victims of the armed conflict.

In the field of security, we could mention the prevention of radicalization, especially among young people, and more generally the fight against terrorism and its financing. But also the fight against drug trafficking, which continues to fuel the Taliban insurgency, promotes corruption and poses a major public health. In this respect, the Paris Pact Initiative, of which Afghanistan and the Central Asian countries are partners, remains a privileged forum for exchange between all countries involved in drug trafficking in Afghanistan.

In the area of economic development, we welcome initiatives aiming at increasing "connectivity" between Afghanistan and Central Asia, as well as in various formats of regional cooperation.

3 / - My third and last remark concerns the support of the international community and particularly the support of the European Union to Afghanistan and Central Asia. This support includes the action of the Special Representative Roland Kobia, whom I would like to thank for his precious work.

For its part, France will continue to cooperate closely with Afghanistan and the Central Asian countries on major international issues, starting with the fight against terrorism, both bilaterally and through the European Union. France will also continue to support the development of these countries in all areas, and to work to strengthen its relations with them.

France welcomes today’s declaration and the “Spirit of Tashkent” as a continuation of the positive momentum achieved during the second meeting of the Kabul process, Afghan-led and Afghan owned. We encourage all participating countries to continue to engage positively in favor of peace and reconciliation in Afghanistan.

Thank you to our Uzbek host for this conference./.