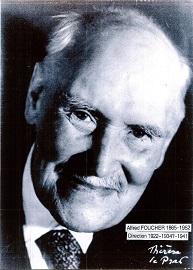 First Director of the French Archaeological Delegation in Afghanistan Before arriving in Afghanistan, Alfred Foucher was a historian of Buddhist art trained at the EPHE where he defended his thesis devoted to “Figured scenes from the legend of Buddha” in 1895. In India from 1918 to 1921 he worked for the Archaeological survey of India. A. Foucher is therefore not a field archaeologist, but he is one of the few to master regional scientific issues and has the support of great researchers, both French and foreign, such as Emile Senart and Aurel Stein. With his wife Enna Foucher-Bazin he joined Kabul June 14, 1922. He resided there until November 15, 1923 when he left for northern Afghanistan and Balkh. He remained there until July 1925.

In his account of his mission A. Foucher does not hide the disappointment he felt on his arrival. At first glance, nothing seemed to indicate that we could make great discoveries : at least those that the scientific community could hope for ; no monumental ruins, nor even fragments of stone columns or capitals, and even fewer statues. Of the capital of Alexander, those of the Kushan kings and the Ghaznavid sultans, only a few mounds of mud bricks damaged by erosion remain.

Foucher, however, decided to undertake a series of polls to find out what was going on. He thus made the choice to work in three places considered in his eyes as potentially important. A good connoisseur of ancient sources and particularly Xuan Zang, a Chinese monk who in the 7th century AD visited Balkh, A. Foucher undertook to explore Top-e Roustam, a small artificial hill located south of Balkh. He was thus able to unearth the remains of a stupa which he identified as the main monument of the great Buddhist monastery of Balkh : the Nau Bahar described, among others, by Xuan Zang.

He then decided to focus his efforts on the highest point of the defensive wall of Balkh : the Arg, which he interpreted as the city’s citadel. He had a trench dug in order to gain a stratigraphic view of the archaeological deposits, but the results were disappointing to him. Another trench in the compound of Bala Hissar (the Round City) also proved inconclusive.

Disappointed and tired, A. Foucher then gave up exploring the Tepe Zargaran east of Balkh. He then decided to put an end to his field mission to return to Kabul and return to France. A. Foucher was never to return to Afghanistan, even if formally he remained director of the DAFA until 1942. It was A. Godard then Joseph Hackin, who joined him at the end of the Balkh campaign, that he entrusted the task of continuing the field work. At the same time, reconnaissance and excavation missions were entrusted to Jules Barthoux. Back in France A. Foucher devoted himself to Indian and Buddhist studies, supervising researchers and writing numerous publications while actively supporting the work of J. Hackin. His mission in Afghanistan was the subject of an 1947 publication : "The Old Road to India." Affected by the death of J. Hackin in 1941 and that of his wife in 1952, he passed away that same year at the age of 87.

Source : Facebook page of the French Archaeological Delegation in Afghanistan