Accueil > Address to HQ RS by the French DA, on the occasion of a minute of silence (...)

Address to HQ RS by the French DA, on the occasion of a minute of silence to the victims of the terrorist attacks in Paris. 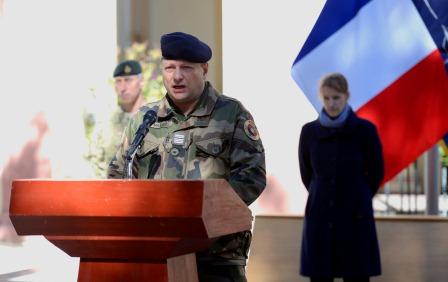 Kabul, 16 November 2015 We’d like to thank you for this solemn moment of solidarity. The terrorists were right in their choice of targets. Paris is a symbol of unity and liberty. And the targets themselves were carefully chosen : a friendly football match between two nations (Franc e and Germany) which have been at war for a long time and are now an agent of peace in Europe, French cafés and restaurants symbolizing the French joie de vivre, and a rock concert, the expression of art and youth. All these are precious symbols of France. And everyone in the world feels that, somehow, these symbols affect him. A great American, Thomas Jefferson, once said : "Every man has two countries - his own and France". Taking away a part of that joy is thus affecting everyone, everywhere, as we can see by the numerous signs of solidarity and condolences But the terrorists are wrong and, unsurprisingly, inept at reading French history. France has never been more united and determined than when faced with the peril against the nation. In the dire hours of darkness, animated with the idea of Resistance against the enemy, France has been the source of all heroisms, and the inspiration for the fight for liberty. Today, more than ever, France is united against barbarism, intolerance, with the support of the international community, without reference to race, culture, creed, or religion. More than ever, we are determined and confident in our commitment to face, with all nations, the enemy of tolerance, intelligence, culture, happiness and liberty, the enemy of a peaceful and free world. Thank you for your support. Be assured of our enduring determination. Vive la France. Vive la Liberté.